Here is a lovely text detailing how fat digestion is handled.

Its worth reading the entire text but in summary ....

1 )  Eaten fat ( triglycerides ) is acted on by lipases in the GI-tract which split it into free fatty acids.

3) enterocytes partition the fatty acids into different fate's, one of which is package onto a chylomicron

4 ) the chylomicron's are released into the systemic circulation where they float around and eventually interact with lipo-protein lipase in the endothelium of the various organs, one of which is adipose tissue. LPL then begins to break down the triglyceride from the chylomicron's into free fatty acids.

5 ) the presence of chylomicron's in the adipose tissue blood vessels also stimulates the release of ASP, acylation-stimulating protein  from adipocytes, which helps shuttle free-fatty acids liberated from chylomicrons by LPL into the adipocyte.

6 ) free-fatty acids that not are shuttled into the adipocyte escape and enter the systemic circulation, where they become part of the serum FFA pool. This contribution can be anything from 5-35% of the total serum FFA concentration.

7 ) once inside the adipocyte, free-fatty acids are once again packaged up into triglycerides, and are assembled into small lipid droplets in the endoplasmic reticulum.

You should of noticed by now that there was no mention of insulin anywhere. So yes, dietary fat can be stored as body fat "without" involving insulin. But its worth noting that the stimulation of ASP by chylomicron's is enhanced in the presence of insulin ( link )

I expect that in the absence of high insulin levels, more of the fatty acids liberated from chylomicron's "spills" over, escaping adipocyte trapping and entering the systemic serum FFA pool. I remember from one of peter's post he mentions that high serum FFA = high energy expenditure, provided ofcourse again we keep insulin low since insulin inhibits fat oxidation.

So at this point one must be wondering, does this mean eating lots of fat and calories even without insulin stimulating carbs, we can get obese? I have doubts about this. The fact that chylomicron's stimulate ASP ofcourse is the ultimate evidence that we dont need ( elevated ) insulin to store dietary fat as body fat. The problem is this..... obesity is so much more than just "excess" triglyceride stored in adipocytes. I think all we can say is that eating alot of fat and calories will likely result in a *bit* of weight gain, as sam feltham proved.

Indeed I do not know of any studies of over-feeding keto in normal lean humans, only to follow them up several years later and find they maintained the elevated fat mass and are resistant to weight loss, both key features of the "obesity " phenotype.

Also of mention is that, although chylomicron's directly stimulate fat storage via ASP induction, researchers do not use chylomicron's in culture when attempting to cause preadipocytes to differentiate into mature adipocytes. They do however, use insulin and glucose.

What happens if you over-express GLUT4 in fast twitch muscle?

( for the record, the over-expressing mice appeared to have about 150% increased basal and insulin-stimulated GLUT4 expression )

Answer: You get a mouse that eats 45% more food than controls but weighs slightly less than them aswell!   Not only that, the over-expressing mice seemed to be quite fond of exercise, with a reported fourfold increase in voluntary wheel running..  So........... theres something about disposing of alot of glucose into muscle that makes you want to move.

I recently posted how, some weeks ago when I re-started melanotan-II injections, I seemed to recover a surge and urge to move, and even found the motivation to start going to the gym again. And well, we saw in the last post that melanotan-II / MC4R signalling in the brain dramatically increases GLUT4 on muscle. It all seems to fit together. ........atleast in theory.

Another correlation here is obese people have reduced secretion of GLP-1 in response to carb ingestion, and GLP-1 potently facilitates glucose disposal in muscle.

How sensitive are you?

Got this link from Bill, it suggests that sleep onset is mediated by an increased sensitivity to GABA in certain area's of the brain. The reason I found this so interesting was because of the idea that a particular cell/tissue can rapidly change its sensitivity to a hormonal signal and that this in-turn controls the behavior of the cell/whole organism.

This phenomenon seems to exist in other area's of physiology aswell. For example, in tanning. with UV exposure, the MC1R is upregulated in the skin, this in-turn increases the production of eumelanin which is a darker pigment and gives your skin a darker appearance or "tan" .

Another situation that this seems to exist is in exercise and muscle hypertrophy, it seems resistance training increases androgen receptor's ONLY in the exercised muscle, and its thought this increased sensitivity to androgens is what mediates muscle hypertrophy.

In the last post we saw a similar thing with brain melanocortin signalling and insulin sensitivity , I.E. an injection of MT-ii into the brain potently increased skeletal muscle GLUT4. 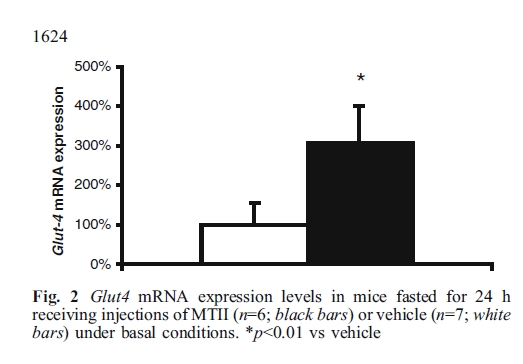 Anyway, its worth remembering that considering cell sensitivity is just as important if not more important than considering the generalized changes in concentrations of hormones in the blood/cerebral-spinal fluid.

weight control with a MC4R agonist

I have to make another post about Melanotan-II ( mt2 )

About 3-4 weeks ago I started another course of mt2. I take 1mg per day ( I am skin type I, "only burns and never tans" probably due to a genetic defect in my MC1 receptor ) , 5 times per week. After 3 weeks everyone asks you "where" youve been on holiday, lawl.

I had forgotten how amazing this peptide is. I noticed instant changes when I started taking it, appetite went WAY down, bodyfat started to decrease, carb tolerance is up, urge to move went way up, I even found the energy and motivation to going to the gym again.

Infact its started to become glaringly obvious to me that weight control with a MC4R agonist is almost effortless. ALMOST! I can only imagine how wonderful leptin must be for reduced obese people, if im having this much of a good time on mt2.

.Feeling revitalized on mt2 I decided to go back and check the literature on this drug, and heres some interesting studies,,,,

Melanocortin receptors in leptin effects. - this study highlights the important point that Mc4R is essentially downstream of leptin, so much so that leptin doesnt work in ob/ob mice if you block MC4R.

Central effects induced by MTII following peripheral dosing - provides evidence that subc administration of mt2 can still cross the blood-brain barrier. This is important because a large portion of mt2's effects on bodyweight occur via central mechanisms.

The leptin-like effects of 3-d peripheral administration of a melanocortin agonist are more marked in genetically obese Zucker (fa/fa) than in lean rats. - Further evidence that MC4R is responsible for leptins effects on bodyweight.

Intermittent MTII application evokes repeated anorexia and robust fat and weight loss. - the appetite reducing effects of mt2 wear off after about 1-2 weeks, I can confirm this, BUT bodyweight stays reduced.

So in short, when melanocortin signalling in the brain drops, you become hungry and want to eat dietary fat, AND simultaneously your body is actively shuttling all fat towards storage.

**Region-specific differences in brain melanocortin receptors in rats of the lean phenotype. - injection of MT-ii into the brain causes increased physical activity.

When dealing with obesity, its clear that people, including researchers and doctors, see what they want to see. IF they want to imagine obese people are simply lazy stupid gluttonous pigs, they will seek evidence to support that.

Stephan Guyenet has an interesting post up about the correlation between calorie intake and BMI. In his post we see a strong trend that as calorie intake increases, so does BMI.

But, is this cause or effect?

I got this study from a recent Mangan tweet

However, things get really interesting when we consider these little snippets I dug up....

So now lets link everything together and see what correlations we have...

Rather than the same old bollocks of  "fat people are fat because they eat too much", instead we could speculate that fat people eat more calories BECAUSE they have more adipose tissue. And they are simply eating more to fulfill their bodies increased energy expenditure requirements.  The increased energy expenditure requirements appear to be ( atleast partly ) coming from them having increased carbohydrate oxidation needs, that is (probably) occurring BECAUSE of their increased adipose tissue mass.

Fat has the power to make you slim

Or rather, your adipose tissue does. No need for all that hogwash nonsense about BAT ( brown adipose tissue ) because it seems white adipose tissue is more than capable of  keeping you lean, provided it just gets the correct signal.

You have to look at this study to really appreciate the power of leptin. Apparently, if you infect the liver with a virus that codes for the leptin gene such that the liver now secretes its own leptin, this leptin acts directly on adipocytes and causes them to completely oxidize all their contents within as little as 7 days.

The implication here is that there is no need to calorie restrict or exercise like a maniac to lose weight, you just need your leptin to be working (properly), and then the adipocyte itself is more than capable of regulating its own size. The novelty of this information is that the adipocytes themselves can massively increase their energy expenditure to keep you slim, the fats do not need to be released into circulation and used up by other tissues, which is what happens if you lower insulin. 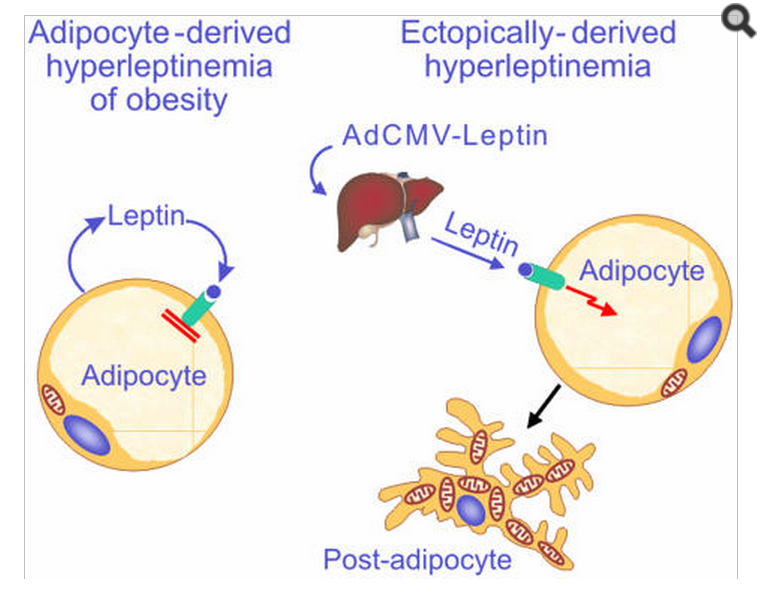 Further, the hyperleptinemia induced by the liver-derived leptin did not increase hunger of the rats, even with a severe loss of bodyfat and massive energy expenditure increase, indicating once again that biology and body weight regulation is all about communication, not calories.

With this in mind aswell as what we know about leptin signalling in the brain it would be very easy to blame obesity on "leptin resistance" since clearly leptin is suppose to function within a negative feedback loop to keep bodyweight stable.

First, you have to harvest some (pre)adipocytes from obese and lean people. You then grow them like this....


You then add the mitochondrial uncoupler FCCP to the mix and measure the increase in the oxygen consumption rate ( as compared to basal ) of those cells from obese people vs lean people, and you wind up with this graph.... 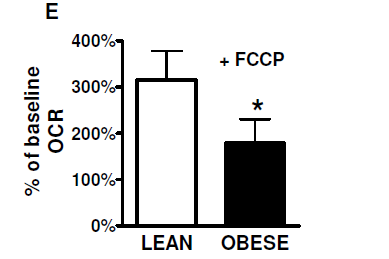 Which tells you that under equal conditions, adipocytes from lean people have greater ability to oxidize fuels ( fats?) compared to adipocytes from obese people. The authors of the paper have no explanation for this particular finding with FCCP. I think it suggests an intrinsic defect in the adipocytes of obese people. 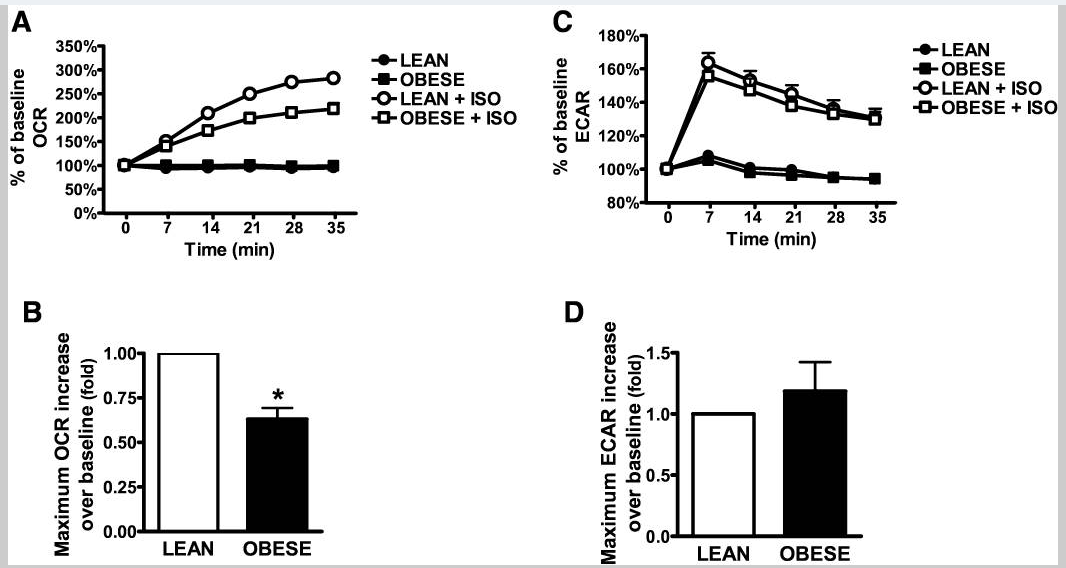 However, they did determine that the reduction in Isoproterenol induced oxygen consumption was NOT due to....


So we are left scratching our heads. We know that obese people store too many calories......in adipocytes. And here we have found that adipocytes from obese people have an intrinsic defect in oxygen consumption when exposed to stimuli that increase energy expenditure. Alas, the penny hasnt dropped yet.

Although this isnt proof of a cause of obesity, a burning question is, how easy is it to stay lean when your body is infested with these "lazy" fat cells?