A new study that is the buzz in the media is about how restricting feeding to an 8 hour window ( during the afternoon-night phase ) prevents the progression of obesity on a diet that otherwise induces obesity in the same rodents if they are given Ad Lib access to the same food around the clock.
The intermittent fasting rodents consumed the same number of calories as the Ad Lib fed rodents yet remained much more slim. So yes, this proves a calorie is a calorie btw. /sarcasm 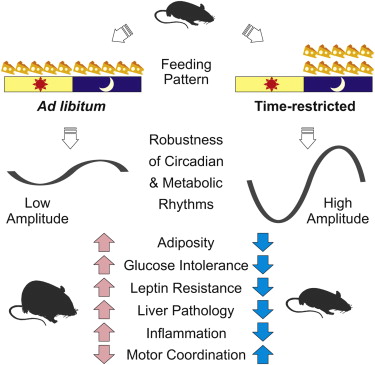 This has come at a time that I was thinking about something mentioned on itsthewooo's blog in the comments about diurnal cortisol. Actually, cortisol essentially makes you quite glucose intolerant, ( like melatonin ), and induces insulin resistance, so it is most likely not a good time to eat food when cortisol is high, like first thing in the morning or immediately after exercise.

This is the daily graph of diurnal cortisol for a normal healthy person. It might be slightly different for an obese person, but it quite clearly highlights the problem with eating food immediately after waking up, especially sugary cereal. You should ideally only be eating when cortisol is low, that means during the late afternoon and evening. Could this be one of the reasons that helped the rodents in the IF study above resist obesity? ( maybe not, since rodents are nocturnal animals by nature, it makes sense for them only to be eating during the night. )
Posted by Kindke at 17:10