Hat-tip to "steve" for this paper + to sidereal for supplying the full text.

We decided to compare the effects of three different puri-ﬁed diets on body-weight development and physiological parameters in C57BL/6N mice when identical diets were either provided in powder form or as pellets.

1) Chow=control diet in 2 varieties, hard pellet form and a form where its ground into a powder
2) "High-fat"  60% fat, 19% prot, 21% carb, both in the hard pellet and powder forms
3) "western style" 36% fat, 17% prot, 47% carb, . in hard pellet form, this was provided in 3 different flavors ( peanut, chocolate, banana ), to test the support for food reward in energy intake, but also it was provided in powdered form.

To start with, here is the graph of body weight in response to the hard pellet forms of the diets, again, nothing we don't already know, the mice are lean on chow and obese on high-fat and western style. 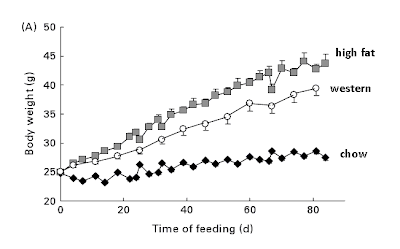 Now, here comes the first interesting part of the experiment, something of which I certainly have never seen before.... 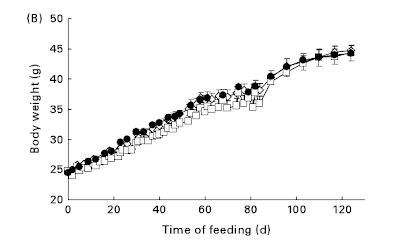 This is the graph of the 3 chow/high-fat/western diets given in powdered form. Yes thats right, once you turn the hard-pellet into powder, the "chow" control diet that usually produces a lean rodent now produces an obese rodent! Infact all 3 diets in powered form produced the exact same degree of obesity. Please note, no changes were made to the "chow" diet other than it was simply ground into a powder. I.E. there was no change in macro-nutrient ratios.

But that aint all, it gets even better,

I suppose your thinking now that since the "chow-powder" diet induced obesity, the mice must be have been gorging on extra calories? Remember the golden rule of obesity research? All that matters for fat mass balance is CICO.

Infact all mice eating all 3 different versions of the powdered diets consumed pretty much the same amount of calories. Normally, mice eating high-fat consume extra calories compared to chow when both are hard-pellet form, but not so for powdered form. In powdered form, mice stop showing hyperphagia on high-fat, although they still develop obesity. There is something gruelingly suspicious here, somehow, changing the texture of the diet changes the diets satiating properties if the diet is high in fat.

This reminds me or something I have noticed when eating butter myself. Namely that, butter that is gently warmed and drank is more satiating than cold butter eaten straight from the fridge.

What about insulin, was insulin raised on the chow-powder diet?

Insulin on all the powder diets was absolutely through the roof. As was leptin. I have no idea if this insulin is due to hyper-secretion or insulin resistance. Despite the very high insulin levels, I would be hesitant to say that this is what is causing the obesity in the powder feed mice, although its not impossible.

Apparently, there was no difference in body weight in the mice fed the different flavored western style diets, thats bad luck for the food reward hypothesis.

Here, we show for the ﬁrst time that a pellet-based high carbohydrate/starch diet fails to trigger obesity, whereas the same diet given in powder form produces an obese phenotype similar to a HF or W diet. While all mice receiving the high-carbohydrate C diets ingested very similar amounts of food and lost similar quantities of energy through faeces, they displayed quite different body-weight gains.

The conclusion from this paper seems to be that, powdered carbs in particular are obesogenic. Its not correct to say this of the high-fat diets because the high-fat and western diets induced similar weight gain regardless if they were hard-pellet or powder.

The thing that immediately comes to mind here is flour and flour/bakery products. This is powdered carbs that we feed to humans. I think we all know how obesogenic these foods are, for example, doughnuts, cookies, cakes, pastry, pizza bases etc. If this research paper is anything to go by the lesson here should be that we should all stay away from powdered carbs.  If your on the LC bandwagon and want to cheat, I would suggest that cheating with powdered carbs is the absolute WORST thing you can do.

Though generally any source of carbs will make you gain weight when straying from the LC bandwagon, I would say DEFINITELY stay away from powdered carbs. Refined sugar is also quite close to the "powdered carbs" category. Extrapolating to say that "all powdered" food should be avoided however, is, not so straight forward.

For example, Whey protein is obviously a powdered food, yet it is anything but obesogenic.  And infact is more associated with weight loss and leanness.

The researchers close with the thought that, all obesity research that has been done comparing high-carb chow to high-fat is essentially flawed.

Finally, we would like to critically ask whether a pellet- based, high carbohydrate/starch diet is a proper C diet when used for comparison with HF diets. Feeding diets with . 45 % energy as fat is meanwhile accepted as a ‘gold standard’ to induce obesity in normal or transgenic mice models. The pellets of this C diet have an exceptionally hard texture and are therefore difﬁcult to chew, to swallow and may need huge amounts of energy for handling in the gastrointestinal tract. They may also cause a loss of energy by the delivery of larger amounts of undigested starch to the microbiota and may after all produce an artiﬁcially ‘lean phenotype’.

Obesity research being flawed? Imagine that.........