There is no substitute for glucose restriction

Let it be known that I suffer from Calorie Denial Syndrome ,

Something which I have come to appreciate about my body is that there is literally, no substitute for glucose restriction in producing fat loss. As a supplement junkie and die-hard self experimenter  I have tried hundreds's of supplements and many strange lifestyle modifications in attempt to get my fat mass down.

Even 23/1 intermittent fasting stalled me out at ~10lbs weight loss.

I have even tried 2g metformin AND 5mg saxagliptin per day, these are major drugs for diabetics that are associated with weight loss. These are also quite high doses.     but no,    no weight loss. Then I added 30g inulin per day to my diet.  But nope, still nout.

My body only works normally when glucose is restricted. Only then does my body act like that of a normal lean person, food is directed towards energy production instead of storage. Only when I restrict glucose is it IMPOSSIBLE for me to gain weight,. satiation signals become naturally in check, and cravings die down. If it wasnt for the fact I am addicted to carbohydrates and that ketosis reduces my sleep duration to 5hrs, I would stay in ketosis FOREVER.

Funny thing is, I do feel that some of these supplements/drugs help with weight loss, but I MUST be restricting glucose for them to have any affect. Basically, when my glucose intake is high, EVERYTHING else is completely trumped, and my body only wants to store fat and gain weight.  For example, recently I was trying 2g metformin per day with a high-carb intake, NOT from junk food, but from potato's, sourdough bread etc. And despite my calories dropping to 1600 per day, no weight loss occurred.

High dose metformin is especially good at reducing food intake and increasing satiety btw, I can attest to this strongly. Metformin has been shown to be a strong inhibitor of AgRP. So if you insist on "cutting" calories to lose weight, you might wanna take some metformin to keep that AgRP down.

Anyway, the real motivation for this post was a tweet by Guyenet linking to this study . One line in particular in the abstract almost sent me into a Wooo-fueled rage.... .....


This is SOOOOOOO wrong. MY failure to flourish on high-carb diets has nothing to do with my protein intake. MY appetite for protein has always been large, typically I need ~100-120g of protein per day for normal satiety and normal mood, and its true that this need in independent of my carb or fat intake. BUT

THERE IS NO SUBSTITUTE FOR GLUCOSE RESTRICTION

So here we have obese Rats, then they receive sleeve gastrectomy, THEN after the surgery the rats get one of the following diets........

The results the researchers obtained were that, post surgery, the HF diet consistently results in higher weight regain, compared to either CH or LCHF.

In conclusion, consumption of a HF diet but not the more energy-dense LCHF diet reduced the effectiveness of VSG in rats.


Although its probably more correct to interpret these results as saying that only the combination of high-carb + high-fat is deleterious, and that this study does not argue for glucose restriction because chow also did not reduce the effectiveness of VSG, I nevertheless disagree.

There is clearly a reason the authors chose to use the word "carbohydrate" in the title of this study, and not the word "fat".

This is an interesting case report ( N=1 ) of a 52yr old female that had her severe Type 2 diabetes resolve after a surgical reconstruction of the gut that involves bypass of the duodenum.


Roux-en-Y gastric bypass (RYGB) results in complete remission of type 2 diabetes mellitus (T2DM) in 80–85% of cases, often before substantial weight loss has occurred [1]. Mounting evidence indicates that this remarkable effect results from mechanisms other than just reductions in food intake and body weight. Among the implicated weightindependent antidiabetes mechanisms, a role has been hypothesized for physiologic changes caused by excluding the proximal intestine from contact with the ingested nutrients [2]. We provide evidence supporting that assertion in the present case report.


To put this into perspective, this woman's BMI was 31.1, so clearly not massively fat, again throwing a wrench into the idea that "fatnass" causes insulin resistance causes diabetes. She was on 2g metformin + 2g glimepiride per day but still had a HbA1c of 7.5% and a fasting glucose of 154. So clearly, despite a BMI that just passes the "obesity" threshold, she is massively insulin resistant.

Initially she undergoes a Billroth I intestinal reconstruction to treat her refractory peptic ulcer disease, but then 10 years later ( during which time her T2DM has gotten even worse and she is now also on maximum dose pioglitazone, with fasting glucose 165 )  she presents with refractory alkaline reflux gastritis which is a known complication of the Billroth I gastric reconstruction. Oh, and her BMI has since dropped to 30.1, so although she has lost weight, she has since become even more insulin resistant.

Anyway, she now has her Billroth I changed into a Roux-en-Y gastric reconstruction to cure the alkaline reflux, but unlike severely obese patients undergoing Roux-en-Y,  this ladies stomach is not reduced in size so that she can still eat normal amounts of food. Here's a picture from the .pdf showing diagrams of the different surgeries.

After the Roux-en-Y surgery, she experiences further weight loss of ~1kg over 6 months, but surprisingly, her T2DM quickly resolves. The lady also reports no significant changes in diet or food intake! 3 days after surgery, her fasting glucose dropped to ~98. So basically, simply bypassing the duodenum and stopping it from interacting with food *cured* her massive insulin resistance. The lady stopped all diabetic medication 3months after surgery and 2 years later her diabetes was still resolved.

The only caveat mentioned by the authors of the Case Report is that, in patients undergoing duodenal bypass WITHOUT diabetes they experience a slight worsening of glucose tolerance.

OK anyway, whats going on here? Her fasting insulin is never mentioned in the report, so I can only speculate, but I think this is what changed and is what allowed her resolve her T2DM. As described in this post,  Pories et al says that foregut bypass usually lowers fasting hyperinsulinemia, which in turn, corrects insulin resistance.

Cases like this not only blow a hole in the idea that fatness causes insulin resistance, but also make me doubt the mitochondrial disease theory of obesity/T2DM, I mean, how would you explain that simply byspassing the foregut *cures* your sick diseased mitochondria?

Pories et al had some interesting quotes at the end of their paper.....

We do not treat hyperthyroidism with thyroxine, or Cushing Syndrome with cortisone, should we be treating T2DM, a disease characterized by hyperinsulinemia, with insulin?


Lowering insulin can make you more insulin sensitive, and if your more insulin sensitive then you need less insulin to actually achieve what it is your trying to do. For example, if serum FFA is too high because FFA leak from adipocytes is high, you might immediately think thats because insulin resistance in adipocytes is too high or that the pancreas isnt producing enough insulin to "overcome" the insulin resistance.

Counter-intuitively, it could be argued that insulin is chronically too high, making adipocytes severely insulin resistant and causing them to leak FFA. Lowering insulin would in turn make the adipocytes more insulin sensitive, and then, youd actually need less insulin to control the FFA leak.

it seems reasonable to propose that a diabetogenic signal from the gut is the cause of hyperinsulinemia.


Although im sure Pories et al had considered this, the thing that comes to *my* mind here is GIP,  Glucose-Dependent Insulinotropic Polypeptide, which is secreted from the K-cells which mostly inhabit the duodenum. As its name suggests, the main job of this hormone is to increase insulin secretion induced by intestinally absorbed nutrients, but it also stimulates fat uptake by adipocytes by stimulating LPL ( link ).

Both fats and carbohydrates are very strong stimulants for GIP secretion, whereas protein is only a weak stimulus for secretion.

Data have shown that obese and type 2 diabetic subjects have an increased response to GIP secretion after the ingestion of a meal (10, 77). In fact, GIP has been established as a possible link between overnutrition and obesity.

High-fat diets increase GIP secretion in part via increased K cell transcription and proliferation and might represent the stimulus for insulin hypersecretion and insulin resistance (32). In human obesity, elevated basal and nutrient-stimulated GIP are associated with glucose intolerance and hyperinsulinemia ( link )


Ignoring the high-fat diet part, I think this is a good explanation for why rodents can become hyperinsulinemic on high-fat diets, proliferation of K-cells in the gut would increase the secretion of GIP in response to fats and thus start an insulin secretion snowball. As im aware, humans do not become hyperinsulinemic on ketogenic diets, so im not sure if this finding translates to humans so easily, but remember that GIP only causes insulin secretion in the presence of glucose, this is why eating fat alone, although it stimulates a GIP response, produces only a tiny insulin response.

With the limitation that we could not establish a causal relationship between events, our study shows that HFD stimulates duodenal proliferation of endocrine cells differentiating towards K cells and oversecreting GIP. The progressive increment of GIP levels might represent the stimulus for insulin hypersecretion and insulin resistance. ( link )


So, nothing is set in stone yet, If we look at the diagram below we can see "why" K-cell proliferation would cause hypersecretion of GIP..... 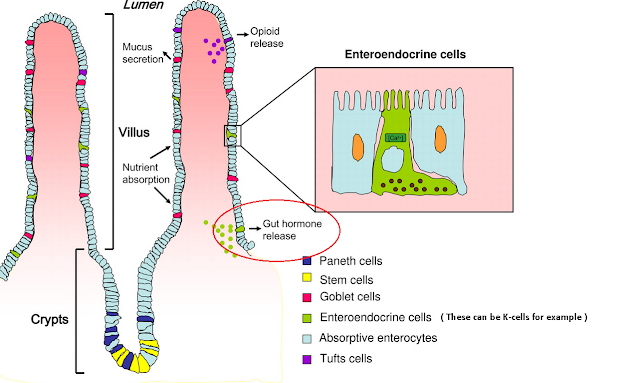 If you look at the red circle, you can see that there are distinct cells that secrete hormones, and that they are different to the cells that absorb food in the GI tract. So, the more of those green hormone secreting cells you have, the more hormone your going to secrete in response to the same food amount.