Crossing thresholds may permanently change you

I cant say ive noticed any new freckles on my face however, just mostly on my body.

If you read other peoples personal accounts of melanotan 2, weight control doesnt seem to be listed all that often. This makes me think I may of been somewhat a super-responder to MT2. Probably because im both weight reduced .....and my obvious mc1r mutation which makes me tan resistant could indicate I have slight mutations in mc4r and mc5r aswell.

Another thing I noticed when injecting MT2 was that I usually always did the left side of my stomach and after sometime the left side appeared more deflated than the right side, making me think that MT2 might have local effects on adipocytes at the injection site. It appears there are mc5r's directly on adipocytes and that may have accounted for this effect.

Whats curious though is the permanent new freckles.

MT2 is a stronger analog of alpha-MSH, which activates melanocortin receptors, but MT2 also has a substantially longer half life.  oh and I forgot to mention, while on MT2, existing freckles went extremely dark almost to the point of black.

This was all sounding eerily familiar, and I suddenly got the idea that maybe alpha-MSH is to melanocytes as insulin is to adipocytes.

But once the super stimulus of MT2 is used, the threshold is passed, and additional cells morph into melancoytes = new freckles.  Exactly how like super levels of insulin and glucose causes pre-adipocytes to morph into full adipocytes and make you gain weight.

And lastly, as mentioned, MT2 caused existing freckles to become extremely dark, indicating that MT2 turbo-charged the production of melanin within these melanocytes.  Well... Lo and behold, this is very similar to what insulin does in adipocytes, it turbo-charges the production and accumulation of triglyceride.......

So,,,,, alpha MSH can cause cells to differentiate into melanocytes and cause over-production of the primary thing melanocytes are suppose to make.......melanin

And....insulin can cause cells to differentiate into adipcytes and cause them to over-produce the primary thing they are suppose to make........triglyceride.


Anway,    there are other areas in biology where crossing thresholds seems to produce irreversible changes. Females that take exogenous androgens ( steroids ) become "permanently" masculinized. .  And its possible that satellite cells permanently morphing into myocytes may account for the phenomenon of "muscle memory" that most bodybuilders swear by.

In both of those cases we are again relying on certain hormones to cross threshold levels.

Is insulin resistance due to a graded loss of insulin response at the individual cellular level or does it reflect changes in the fraction of cells responding to insulin?.......

Or atleast, only partially true..

The first caveat to note, is that they are using GLUT4 translocation as the surrogate for the IS of the fat cell.

Systemic insulin responses, such as glucose clearance, represent the integrated GLUT4 translocations of all responding muscle and adipose cells


So the more GLUT4 translocation we get in a fat cell, the more IS it is deemed to be. Previously, the authors had discovered that human adipose cells cultured in vitro WITHOUT the hosts serum retain the IS status of their host. This would imply that circulating factors in host serum (i.e. hormone levels etc) may not play as important role in the IS of the individual as previously thought, and instead suggests that the IS of a fat cell is an intrinsic property of that cell.

Another interesting point is that, when adipose cells are isolated and tested individually for their IS, there is marked heterogeneity between cells in their responses.(2) That is, each individual adipocyte will display a unique and highly reproducible response.  As the authors of (2) say...

These data highlight that the response of a cell population to insulin is underpinned by extensive heterogeneity at the single cell level. This heterogeneity is pre-programmed within each cell and is not the result of intracellular stochastic

Testing and Data from (1)

The tests performed by (1) were to isolate 8 individual fat cells from the abdominal subcutaneous depot of 19 different subjects,  all of whom showed a very wide variation in their whole body IS status.

The cells were incubated in the absence ( basal ) or presence of 0.1 IU/ml insulin (maximal stimulation) and GLUT4 translocation markers were assessed. 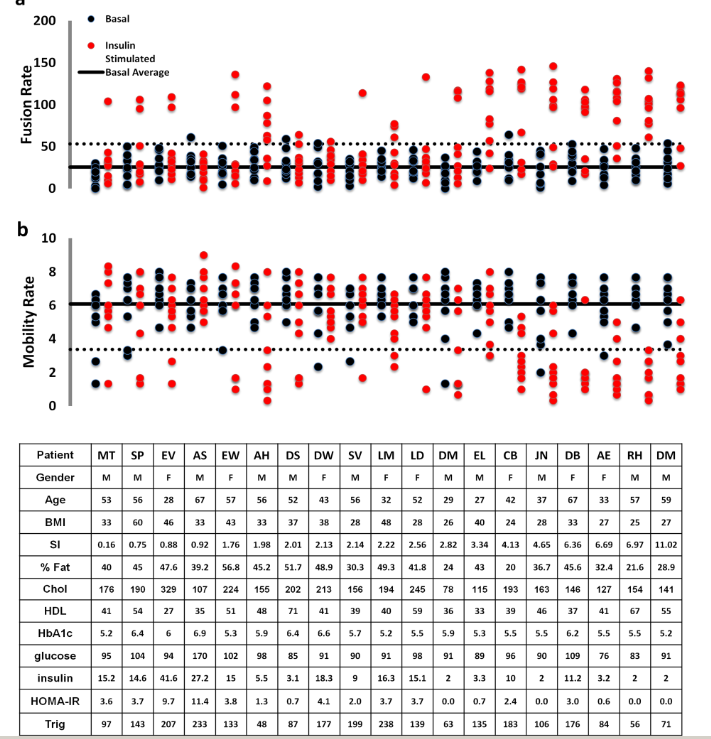 Interestingly, the major difference between cells from insulin-resistant and insulin-sensitive is not the individual cell response amplitude, but rather the number of cells that exhibit a 3–4 fold response. Simultaneously, in almost every subject, we observed some cells that do not exhibit any insulin response at all.

Infact, if you plot all the data on a BeeSwarm style graph... 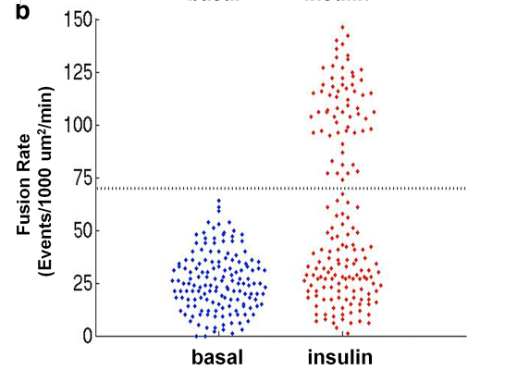 ....you get a graph that looks like a bimodal function. I.E. 2 distinct states of normal distributions. Based on this the authors propose that fat cells exists in 2 distinct states, "basal" and "insulin stimulated".

Thus, GLUT4 translocation in individual adipose cells isolated from human subjects is better characterized as an all-or-none (bimodal) response than a graded response. Our single cell analysis of human adipose cells reveals a bimodal distribution for each of two characteristic properties of GSV, mobility and fusion, affected by insulin. This invariance in the underlying distributions, refractory and insulin-stimulated, with a clearly determinable fraction of cells populating these two states in each subject, is consistent with a threshold or switch-like transformation from the basal to the stimulated state upon addition of insulin


Threshold type triggering systems exists everywhere in biology, and it wouldnt surprise me if something similar exists for how adipose cells respond to insulin.  I (speculatively) envisage that each individual adipose cell probably has a threshold insulin responding level,  if it sees insulin below that threshold concentration, no response is initiated. However as soon as it sees insulin above the threshold concentration, it immediately enters the "insulin stimulated" state and simultaneously fires its entire GLUT4 cache.  This threshold level is probably changeable depending on hormonal inputs into the adipose cell.

"previous studies have shown that changes in insulin receptor number can change the sensitivity but not the maximum responsiveness of insulin action(3) ."

Even more intriguing from (1), the authors ruled out that fat cell size was the deciding factor in whether or not a fat cell responded to 0.1 IU/ml insulin, as no correlation was observed between fat cell size and GLUT4 translocation.

From fig 5a. , the response of the group of fat cells to different insulin doses was a graded response. 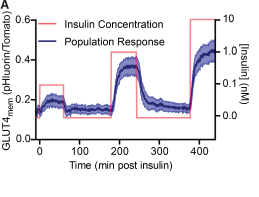 They noted that at the lowest insulin dose, only 30% of cells from the group displayed any detectable response, which is consistent with the idea that each cell has a threshold insulin trigger level that must be passed before it will show any insulin response.

However, somewhat contradictory to ref(1), they found fat cells that responded in both a graded response manner and a bimodal response... 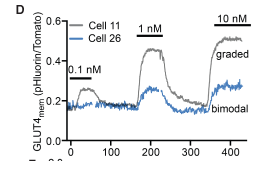 I emailed the authors of ref(1) about this seeming contradiction, ( because (1) declared fat cells as being bimodal while (2) found evidence for graded responses aswell as bimodal)   and specifically asked how could they determine the presence or absence of a graded responses if they only tested with 1 different insulin dose. They have yet to email me back.

Three important conclusions from ref(2) are....

Here's the key quote from the abstract...


Although the authors of ref(4) attribute this to"impaired" adipogenesis,  I dont agree. The lowered expression of these adipose gene's *is* what makes the fat cells smaller and probably also more insulin resistant. But this is not a "defect" , but rather it is a reflection of their genetic inheritance.

We know insulin resistance has a genetic component and runs in families. I reckon what is happening is that offspring of insulin resistant parents are simply inheriting pre-adipocyte pools that have lower levels of histone acetylation of those adipogenic gene's in them. (particularly PPARgamma)

Remember from ref(5),  the histone acetylation ( H3 anyway ) of an adipocyte is maintained even in the de-differentiated state. This implies the pre-adipocyte already contains a blueprint for exactly what type of fat cell it should become ( large vs small etc ), if and when it ever gets the signal to turn into a  fat cell.

So.... as this normal person starts to eat obesogenic food ( processed carbs ) , morphological changes to the intestine and pancreas takes place, causing hyperinsulinemia and hyperglycemia, which in turn start to activate all his pre-adipocytes and turn them into mature fat cells. These new fat cells start to store their own fat  ( thats what fat cells do, calories are irrelevant, exactly like how myocytes are going to build myofibrils even if you keep protein intake low.. ) , and the person overall gets "fatter". No doubt the insulin also causes existing adipocytes to hypertrophy.

Depending on the genetics and epigenetics of the pre-adipocyte pools you inherited from your parents, these pre-adipocytes could turn into small insulin resistant fat cells, in which case youll only gain *some* weight.and as your insulin levels continue to increase, putting increased insulin sensitivity demands on your body, these fat cells cant fulfill that demand for increased insulin sensitivity, and youll been seen as "insulin resistant" and labelled diabetic ..........Or they could turn into large insulin sensitive fat cells, in which case youll get super obese. I also expect numbers pre-adipocytes in pools differs between individuals, which would further contribute to your propensity to get extremely fat.

So when a diabetes researcher harvests fat tissue from an obese insulin resistant subject and observes them under a microscope and sees lots of small fat cells and concludes "defect in adipogenesis!" . I say NO.

I say, your just observing the genetically inherited destiny.of his cells.