In reference to the mysterious hormone Kekwick and Pawan talked about in their 1960's era papers. Seriously, does anyone know what this is?

Best & Campbell in 1936 spoke of a substance isolated from the pituitary that would cause liver fat accumulation during fasting, while simultaneously decreasing fat contents of the fat depots ( i.e. bodyfat ).In 1947 Weil et al also confirmed the presence of a "fat mobilizing agent" isolated from the urine of a fasting rabbit, but not the normally fed rabbit.

They describe how injection of this substance caused an accumulation of liver fat at the expense of bodyfat,

So in essence, this substance either just straight up increases energy expenditure and/or reduces energy harvest from metabolic fuels. Below are graphs of bodyweight of mice following injection of this substance, the substance produces a decrease in bodyweight without any significant changes in food intake. 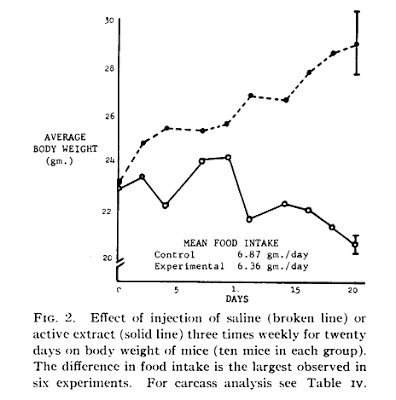 Here is a graph when the injections are stopped after 10 days, NOTE the rapid return of bodyweight? 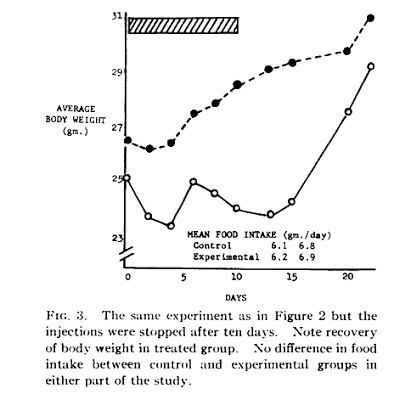 In the study they confirm the substance is not Corticotrophin, or Growth hormone, although it has similarities with these.

So the question is, what is this substance? Does anyone else know more about it? Has it since been proven to be a hoax?

I and others have commented on how extreme carbohydrate restriction in particular seems to produce rapid loss of bodyfat, and I cant help but wonder that in addition to reduced insulin, that this mysterious substance is also playing a role. The most shocking point is above in Fig 3, I.E. the rapid return of bodyweight after injections cease without changes in food intake. This sounds eerily like the rebound weight gain people experience after a period of lowcarbing when they try to re-introduce carbs into their diet. A re-introduction of carbs according to Kekwick and Pawan's research would shutdown production of this fat-mobilizing substance, and potentially make your regain weight, as in Fig3. with no changes in energy intake.

Thanks to Bill, I was able to get hold of the 1964 study  by Kekwick and Pawan that looked at high-fat diets in mice, at 50% calorie restriction, an 80% fat diet produced substantially more fat loss than a 80% carbohydrate diet, Kekwick and Pawan noted increased excretion of energetic metabolites on the 80% fat diet in the urine including Pyruvic acid, citric acid, and lactic acid. In general they report that urinary carbon increases in response to carbohydrate restriction, I.E. "wasting of energy".

Where fat supplies the major part of an energy deficient diet, there appears to be no attempt to utilize the diminished calorie intake more effectively in terms of supplying the organism with energy. It must therefore provide the whole of the deficiency from its own fat stores. \Vhen carbohydrate supplies the main part of a calorie deficient diet, the organism appears able to utilize the energy to better advantage and the deficiency required to be supplied from its own fat stores is less. On energy deficient diets of equal calorie value the animals are likely therefore to lose weight more rapidly when the calories are supplied in the form of fat than when they are supplied in the form of carbohydrates


One of their ideas for the increased fat loss on the high-fat diet is again the increase in this "fat-mobilizing substance" which is turn causes increased excretion of energetic metabolites in the urine.

So please, maybe someone can chime in here? Is this "fat mobilizing substance" bogus? IS there more to lowcarbing than simply a reduction in insulin?

Cessation of physical exercise changes metabolism and modifies the adipocyte cellularity of the periepididymal white adipose tissue in rats.

Im still waiting to get the full text of this study but thought id throw up the abstract. The message from this study seems to be that, if you stop exercising, you activate a lipogenic gene profile in adipocytes that seeks to fatten you up.

This lipogenic gene profile seems to go above and beyond what you would of had if you had just been sedentary and never exercised instead. So in this context it looks like, its better to not start an exercise regime at all, rather than start it then stop it later.

If you start an exercise regime, better keep it up forever!

Compared with T, the isolated adipose cells (D rats) showed a 48% increase in both basal and maximally insulin-stimulated lipogenesis


This is as I suspected previously, I.E. that the adipocyte phenotype can control its size independent of numbers calories going in the organisms mouth. ( when I say adipocyte phenotype I simply the mean particular gene expression of an individual adipocyte, and the different ratio's of receptors on its surface etc.)

Mcdonalds is still very popular here in the UK/london, despite the fact that the vast majority of their calories are highly processed carbohydrates.

I went to my local Mcdonalds near my work during the nightshift recently, just for a change and because I havent had it in years, and even at 9pm at night, there was a queue for the drive-thru aswell as a standing queue of people that spilled all the way out to the entrance.

Everyone "knows" Mcdonalds is unhealthy, but walk into any chain in london and youll see business is booming for them. Ironically, the majority of the people eating at Mcdonalds are slim or only slightly over-weight, and we dont judge them for eating there.. But if we spot a fat person at Mcdonalds, we are instantly like "eeh dafuq? He shouldnt be allowed to eat here!"

I think fast food in general is a booming business, fried chicken shops litter literally every street in london. There is no better business model than cheap, tasty food. The only reason these people running these shops are not making more money is because competition is fierce.
Posted by Kindke at 14:04 4 comments: