One of the reasons it is hard to dissociate calorie balance to weight is because your intestine secrets a large number of hormones upon food ingestion and the magnitude of the hormone response is proportional to the calorie intake.

I was doing some research on Orlistat which is one of the few drugs approved for obesity treatment. Its suppose to make you lose weight because you "absorb" less calories, and the unabsorbed fat comes out the other end, sometimes violently.  Orlistat produces only mild weight loss after 1 year of use, ~2.89kg, which essentially makes it useless, but its the mechanism of weight loss that im interested in.

This paper looks at the effect of orlistat on GIP secretion. Ive talked alot about GIP before, its an anabolic hormone secreted from the intestine in response to both fat and carbohydrate digestion, but remains almost unchanged in response to protein.  A look back at this post and you see a graph of GIP in response to nutrient ingestion.

Heres some quotes from the orlistat paper....

Our results demonstrate that in nonobese healthy subjects orlistat accelerates gastric emptying of an orally ingested ∼500 kcal solid-liquid mixed meal and attenuates plasma GIP response, while it does not appreciably alter the plasma responses of CCK, GLP-1, and PP compared with control.

GIP is secreted from enteroendocrine cells of the K type in the upper gut in response to nutrients in a load-dependent manner, fat being the most potent secretagague in humans

There are functional GIP receptors on adipocytes, which have insulin mimetic properties such as uptake of glucose (37), fatty acid synthesis, upregulation of lipoprotein lipase synthesis, and reduction in glucagon-induced lipolysis

Thus GIP acting on its specific receptors and via insulin secretion promotes fat accumulation in adipocytes, obesity, and thus insulin resistance. GIP receptor knockout mice who are fed a high-fat diet are resistant to obesity 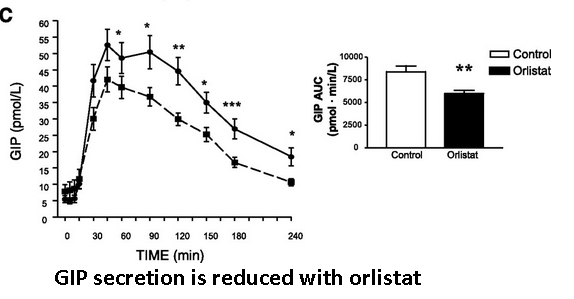 So im thinking, orlistat most likely causes weight loss because GIP secretion is reduced. The problem ofcourse is its hard to disentangle this from the idea that the weight loss is caused by reduced calorie absorption because GIP is secreted in response to free fatty acid absorption into the enterocyte.

Anyway, Im not trying to put forward the idea that "fat is fattening", I dont have data on how potent GIP is on adipocytes compared to insulin. But if you look at the data solely on GIP, its clearly a "fattening" hormone. and it *is* secreted primarily in response to fat.  ( GIP also is important for bone density, i.e. it increases bone mass, so blocking it completely might not be a good idea )

intriguingly it was also reported in the "accelerated glucose absorption" post that obese people exhibit enhanced GIP secretion in response to nutrients. A great example of how "a calorie is not a calorie".

I intend to experiment with orlistat on LC when I get the chance. Hopefully the Steatorrhea wont be too bad... 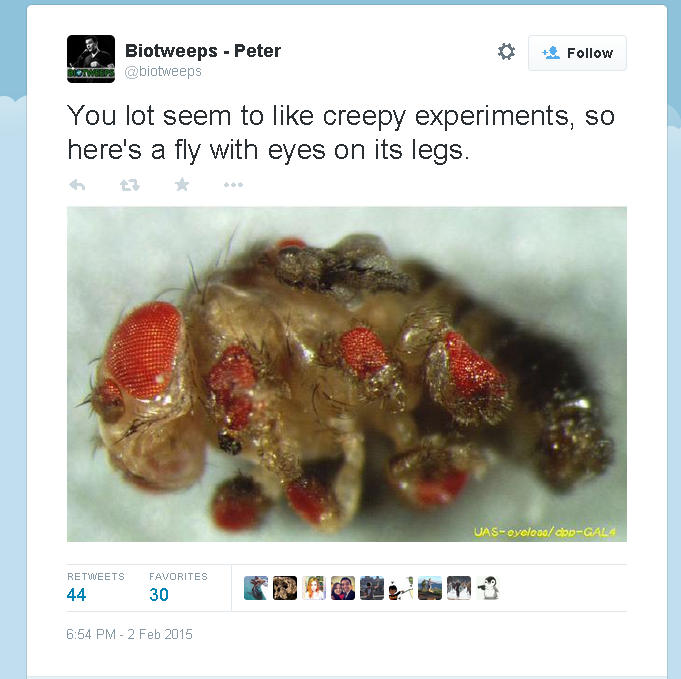 despite it being quite disturbing, something out of a horror movie, reading the ensuing discussion was fascinating. This article explains what is going on.

Basically, there is a gene they refer to as "eyeless" and when activated, this gene sets off cascade of signalling that results in the growth of an eye at that location.

The reason I found this so interesting is because we have also seen here on this blog another candidate for a "master" gene. PPAR-γ.    Just as activating "eyeless" caused eye growth in strange places of the body, substantial evidence indicates that activating PPAR-γ causes adipocyte appearance.

My guess is, it probably didn't how much the fly ate and exercised, once the eyeless gene was on, the eye WAS GOING TO GROW, regardless.

At this point im fairly sure that the cause of obesity is refined carbs promoting hyperglycemia and hyperinsulinemia.  These 2 in turn promote epigenetic changes to adipose tissue aswell as the recruitment of adipose tissue progenitor cells ( preadipocytes ) Once a preadipocyte turns into a mature adipocyte, its going to store (alot) fat, everything else is irrelevant.

I also found this interesting post on t-nation, where he explains that people who respond poorly to resistance training do so because of genetics and poor recruitment of muscle progenitors ( satellite cells ).  This could potentially be similar to the reason some people are resistant to obesity, i.e. failure to recruit progenitor cells in adipose tissue.