Can you be fat without insulin?

Is it possible to still be fat even if we get our insulin low?

Fuck it, I mean NO insulin at all.

The thing I am most irritated about, is that , while insulin clearly plays a very large part in weight and fat mass and hyperplasia, im fed up with alot of so called low carb "guru's" with their almost shill like behavior chastising people who cannot get normal BMI on a low carb diet.

The cause of the problem is obvious, low carb works, UNQUESTIONABLY, but its the people who arent doing it right!. They're secretly sneaking in carbs, or their gorging on millions of calories etc etc.

Basically, if you cant get normal BMI on low carb, the problem is YOU, ( not the diet ).

They are guilty of the same thing they attacked low-fat and CICO advocates for in the original uprising of lowcarb popularity.

To answer the question in point.... can you be "fat without insulin", I want to take another look at the FIRKO mouse study. ( Please Read peter's blog post on it here, to get a nice primer ) 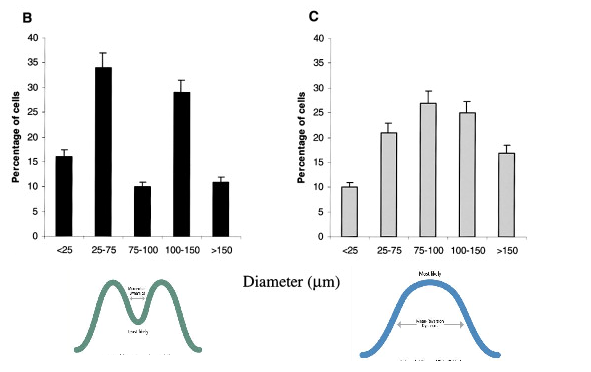 The key point of this figure is that, even with utter absence of insulin, a percentage of adipocytes still store a large amount of fat. I.E. some adipocytes are still "fat" even without insulin. Indeed if we go just by these 2 figures it looks like what insulin does is make adipocytes store an additional amount of fat , on top of the amount of fat they store in the basal state.

so, if some adipocytes can still store large amounts of fat without insulin directing them, you have to ask yourself what implications that might have for getting normal BMI on a low insulin low carb diet.....

The fact that we get a bimodal distribution of fat cell size in the absence of insulin is remarkably similar to what we observed in the insulin sensitivity post, I.E that the insulin responsiveness of a fat cell was also described by a bimodal distribution. Together, all this points to as I have been trying to say, that the properties of a cell can be strongly determined by "intrinsic" factors present in that cell, and the most likely explanation for those factors is gene expression.

A fat cell will have thousands of different gene's expressed at different levels, and the resulting phenotype of that cell will be the sum of all those factors, of all the various histone modifications and methylation status of those gene's.


What else can we learn from FIRKO 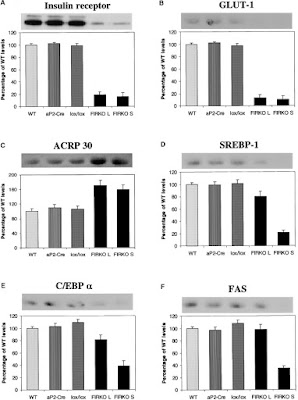 Given that SREBP-1 and FAS are key proteins involved in fat metabolism and lipogenesis, they are a good explanation for WHY some adipocytes can remain large even in the absence of insulin. because the levels remain very high, even without insulin.

Overall this result is exactly what you would expect given the bimodal distribution we have already observed, I.E. 2 distinct types of adpiocytes, characterized by their expression of adipocyte gene;s which likely also affects their insulin responsiveness. 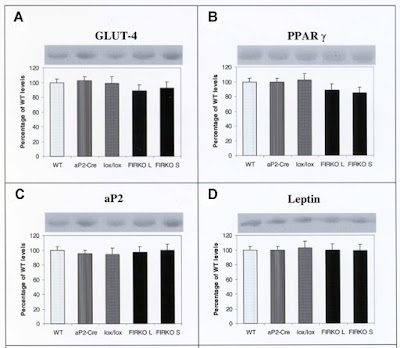 Interestingly, the protein levels of GLUT4, PPARg and Leptin are independent of insulin. It would thus appear that insulin controls the translocation of GLUT4 to the cell surface, not the amount of GLUT4 in an adipocyte. The results of the PPARg and leptin also fly in the face of what I have blogged on before, even small adipocytes contain the same amount of leptin as large adipocytes. And PPARg does not appear to predict adipocyte size in this data set. ( I would of expected larger adipocytes to have higher PPARg, and vice versa for the small adipocytes. *shrug* ) 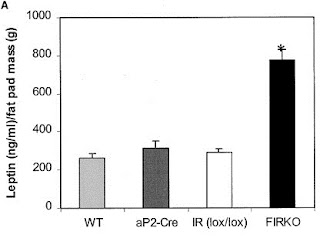 There is a huge amount of research detailing the interplay of insulin and leptin, so I wouldnt discount that connection just yet, but rather there is likely some fine tuning and *small print* regarding regulation of leptin levels.


Tying it all together


There is a 2004 spin-off study of FIRKO that examined adipocyte size heterogeneity in relation to insulin and gene expression.


These data suggest an intrinsic heterogeneity of adipocytes with differences in gene expression related to adipocyte size and insulin signaling.


They also mention in the study, that adipocytes within the same adipose tissue depot may not be of the same lineage. And this has implications tying in with my last post, which detailed how hyperplasia is very likely a major factor in obesity and that the extra adipocytes you gain in obesity are *different* from your normal adipocytes.

Imagine, as a person developes obesity, the stem cells he causes to differentiate into mature adipocytes hail from the "large, insulin unresponsive" lineage like those identified in the FIRKO? These adipocytes would be largely immune to weight loss in response to low carb dieting.

In a similar fashion, if you differentiate adipocytes from the "insulin sensitive" lineage, youd probably have good success in low carb dieting as these adipocytes will likely shrink alot when you lower insulin, but youll easily and quickly regain weight if you went back to carbs and increased insulin again.

Does this sound familiar?

In all likeliness, obese people would likely contain different combinations of both adipocyte cell types, but the spread again might be normal distribution. I.E. some people respond REALLY well to low carb, ........most people will lose *some* weight on low carb........, failing to achieve normal BMI. And a few unlucky people will struggle to lose anything on low carb.

Im not attempting to attack low carb diets here, They work exceptionally well for metabolic syndrome , but as far as weight goes, theres alot of other factors at play. Gene's,  gene expression and hyperplasia status COUNTS. And the so called "lowcarb" guru's should acknowledge this.