Ive long held this belief that it does.

That, somehow the adipocytes drive to keep itself "filled" will not only alter systemic hormones and calorie partitioning to accomplish this but also drive the host to eat more.

I think this goes much beyond leptin, which is not an "anti-obesity" hormone that many people still think it is ( leptin resistance is a hoax lol, get over it ) but rather it is an anti-starvation hormone. Leptin becomes important when your deficient, and that is all.

A quick shout-out to Bauer's 1940 paper OBESITY , ITS PATHOGENESIS, ETIOLOGY AND TREATMENT,

I know, you might be thinking, "lol this paper is from 1940! we are much smarter "now" and have advanced much in the research and knowledge "now" ". ..... HAHAHA

Well youd be damn wrong. Read the damn paper. If you think your "smarter" than people that were around in the 1940's or earlier just because its "ancient history" , seriously, think again.

Anyway, I want to do a more formal post on bauers paper but I think it would be alot of work also it is not easy chasing his old references. Suffice to say he brings up alot of interesting points regarding obesity and dismisses the CICO idea, he puts forward the lipophilia hypothesis ( which is what I actually believe is the cause of obesity* ) This lipophilia idea is basically that it is the adipose tissue itself, factors intrinsic to the adipocyte, that determine its "drive" to store fat and that is the reason people become (maintain ) obese. Due to intrinsic factors, the adipose tissue not only is more willing to suck up and store fat, but it is simultaneously less willing to release that stored fat.

Infact this idea is a good fit with the observed fact that the vast majority of obese people who attempt to lose weight end up rebounding back to their starting weight and this even occurs in bariatric surgery though to a lesser extent. If we accept the idea that the adipose tissue has its own drive and blueprint for the size and shape its suppose to be ( determined by intrinsic factors like cell number, genetics, histone/methylation status etc ) then it makes complete sense why virtually everyone rebounds.

Theres plenty of evidence for the "lipophilia" hypothesis, adipocyte hyperplasia, cathecholamine resistance, I.E. adipocytes resist release of stored triglyceride, this study was another example where the average half-life age of triglycerides is increased in obese suggesting their fat cells like to "retain" fat. A 2008 study also found increased cavolin-1 in adipose tissue of  obese, this is something that is much less known about in the diet and fitness industry. Cavolin-1 helps make caveolae in adipocytes which are basically little docking harbors for nutrients to enter the cell, although I prefer to think of them as calorie uptake suckers.

A dramatic increase in the cell surface expression of caveolae is what happens when a pre-adipocytes morphs into a mature adipocyte and almost certainly is what facilitates the massive increase in lipid storage that occurs in the transformation. This is probably what they were observing in this 1983 paper when they state      ... quote...


a ninefold increase in small invaginations as the cell differentiates from the fibroblast to the adipocyte phenotype;

Back to the topic of this post, which relates to this paper  they didnt know about leptin in 1977 but they had strong reason to believe that body weight and fat mass was "regulated" around a certain point. The reason for this paper was the continuing investigations into compensatory adipose growth that sometimes occurred in rodents with surgical removal of their adipose depots. In some cases, surgical removal of some adipose depots caused enlargement of the remaining ones so that total body wt stayed close to that of intact controls. Hence giving rise to the notion that wt is "regulated" to a certain value.

In this study, they cut out a large portion of the epididymal fat depot aswell as some of the subcutaneous inguinal fat depot, ..... THEN ...... they split the rats into 2 groups, chow diet and high fat diet.

On the chow diet, as expected, there was compensatory growth in the un-touched fat depots of the lipectomized rats such that their fat mass got to a level similar to intact controls.

However on the high-fat diet something unexpected happened, the lipectomized rats ate less than the normal rats on high-fat and ofcourse ended up with less total fat mass. 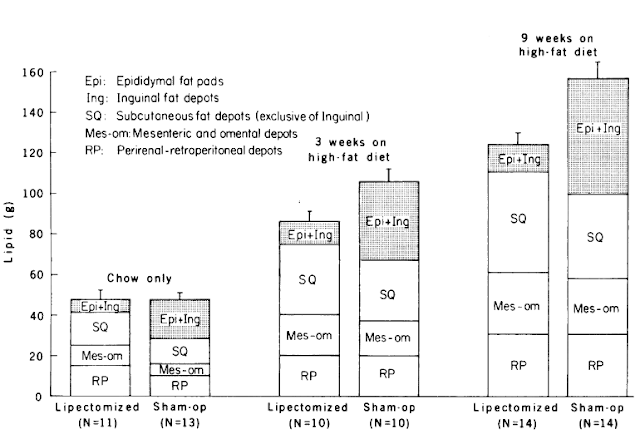 The cause/effect direction of the results of this study are open to "debate" but the crux is this, why did the lipectomized rats on the high-fat diet eat less and gain less fat than the high-fat controls?

If you assume that they gained less fat BECAUSE they ate less, your still left with the corollary that removing adipose tissue reduces appetite. I dont see any way around this conclusion.

Alternatively, you could take the taubsian stance and postulate that they ate less BECAUSE their adipose storage capacity was reduced. ( or rather their potential for adipose growth was reduced. )

Either way, your stuck with the inescapable suggestion that adipose tissue controls appetite.


* - about the asterisk above, I wouldnt say that the lipophilia is *the cause* , but rather , it is what is responsible for the maintenance and persistence of the obese state. I still believe that the cause and triggering event is high glucose and insulin concentrations.