Do these people need to go on a diet? 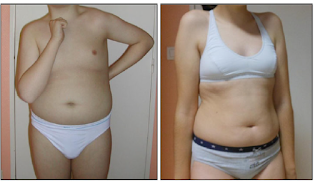 And if so, what diet should they go on? Should we fast them? starve them? low-carb them? haul them to the gym?

Also, what kind of increased fatness are they appearing to suffer from? adipocyte hypertrophy? hyperplasia? ( I suppose the one on the right is quite typical of what you would find in western women these days )

How did they get like that? Did they eat too much? Exercise too little?.......   Think about what kind of initial "intuitive"  judgement youd pass on these people.

The picture was pulled from this paper  where the subjects have a genetic condition referred to as "cohen syndrome".   But you didnt know that from just looking at the picture. I bet you just thought they ate too much , or maybe too many carbs?

What I find interesting is how they could just pass for normal random fatties by todays public standards, despite the fact the have an underlying genetic condition that makes their preadipocytes more sensitive to differentiation into mature adipocytes, they appear quite symbolic of the kind of increased fatness you can expect in "normal" people.

Even more interesting, I expect youd be less inclined to recommend "lifestyle" interventions to these people now you know they have a genetic condition, yet "lifestyle" interventions are recommended to normal obese people everyday despite the fact we are all suffering from the same condition, I.E. excess preadipcoyte recruitment. When it comes to obesity, it seems we are more inclined to prescribe treatment that is dependent on how we view the causality to have progressed.

Got fat by eating too much/exercising too little/ too much carbs? -> solution is to cut cals/carbs/exercise more! Trying fasting for a month maybe.

Got fat by having an underlying genetic condition ???? -> hmm probably need medical intervention.

Anyway I want to talk a bit more about what exactly is increased adiposity. Lately I have been reading more on adipocyte differentiation / adipogenesis, and I really feel this is primarily whats happening in all forms of obesity regardless if it is genetic or ,  :cough:,  "lifestyle" induced.

I wrote a another post on this idea here   I think theres probably a few people in the literature that also think hyperplasia is the primary thing in obesity.

Adipogenesis, the differentiation of precursor cells into mature, terminally-differentiated adipocytes, occurs throughout the human life cycle and is believed to be the primary cause of increases in body fat.*


If preadipocyte recruitment is the primary lesion in increased fatness , this ties together so many loose ends, It fits in with bauer's "lipophilia" hypothesis, and helps explain why obesity is persistent, ( dieting probably doesnt cause adipocyte de-differentiation )

I always make the analogy with MT2 and freakles/moles, with super levels of melanocortin receptor agonism I differentiated additional stem cells in my skin into melanocytes but they didnt go away when I stopped MT2. Similarly with super levels of insulin from carbs I differentiated additional preadipocytes into mature adipocytes that dont go away when I lowered insulin with low carb.

Is there any hope?

I remain highly pessimistic but anyway, another paper caught my eye recently.. Now I didnt know this but apparently most in vitro work on adipose study is done with newly differentiated preadipocytes, and the reason being because mature adipocytes harvested from living organisms rapidly undergo de-differentiation in cell culture.

That is, they turn back into preadipocytes and relinquish their lipid hoard ( I.E. you lose wt )  and regain their ability to differentiate into other cell types.

Since adipocytes are terminally differentiated, they can be used immediately for test purposes.6

Several studies have been performed to establish the isolation and characterization of mature adipocytes in between the 1960s and 1990s.7–10 Since then, mature adipocytes were only rarely used, probably because of their mainly cited drawbacks such as vulnerability and dedifferentiation under in vitro conditions.

It is well known that these cells start to dedifferentiate after 1 or 2 weeks,7,11,12 at which point, the cells reach a multivacuolar morphology while they are diminishing their cell volume.9,13 Elongated, nonlipid filled dedifferentiated fat cells (DFAT) are further able to proliferate and exhibit multilineage potential.14,15 These cells are known to express stem cell markers, such as CD73.


My earlier work on adipocyte apoptosis was probably a bit pointless now as I realize its probably not necessary to kill excess fat cells with apoptosis but rather just make them de-differentiate back into their preadipocyte non-lipid filled state.

Easier said than done though I suppose ! So the big question is if we can get fat cells to de-differentiate so easily in cell culture how can we do it in vivo and lose weight?

I dont know the answer and neither do the authors, although they mention that agents/hormones that promote lipolysis seem to be facilitating de- differentiation this is just speculation, and I'd be quite surprised if the reason adipocytes de-differentiate just because they lose lipid from increased lipolysis, and more likely the agents/hormones are causing epigenetic chromatin changes to the adipocyte gene's, re-coiling up those parts of the DNA and silencing those adipocyte markers.

adipocyte dedifferentiation in pubmed yields 141 search results. its not a well studied area, and perhaps thats why we still have an obesity epidemic.

**I think its possible that some adipocytes may de-differentiate while dieting, I cant rule things out without experimental data, I think we have to assume though that most people dont experience this as when dieting they reach a plateau.