Increased glucose transport in the duodenum of diabetics

From a 2002 paper, the researchers found in the biopsies taken from the duodenum of diabetic patients greatly increased glucose transport, when compared to healthy controls. 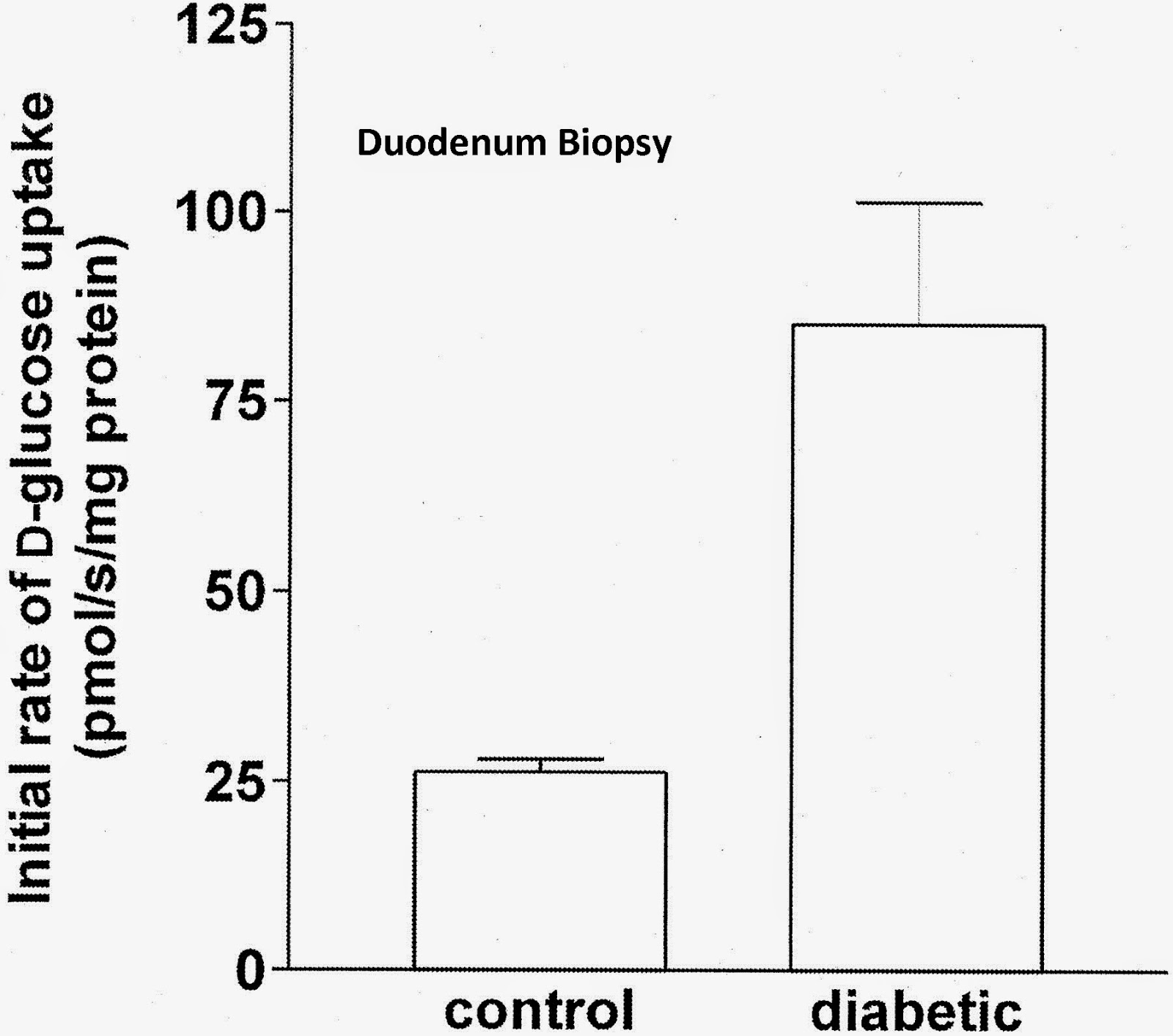 They also found much higher protein levels of the glucose transporters SGLT1 and GLUT5 and GLUT2. Not only that, they found increased activity levels of the enzymes sucrase and lactase that break down sucrose and lactose respectively.

Jeez, so it looks like the intestine of diabetic people has undergone some serious morphological changes to make carbohydrate digestion faster, and not surprisingly this is probably what contributes to excessive hyperglycemia in diabetics when they try to eat carbs.

The reason this should be so concerning is because of the huge body of literature which suggests that it is the fast digesting and processed carbs that cause diabesity. High GI foods and in particular powdered carbs are reported to be the worst offenders.

To what degree does eating high GI foods/powdered/processed carbs mimic having elevated glucose transporters in the duodenum, I can only speculate.

People are not born diabetic, ( although thats been changing in recent years ), they become so after exposure to the "western diet". So I think it would be fair to say these morphological changes to the intestine are a biological adaption to a carb heavy processed diet.

Whats more intriguing are the results from gastric bypass surgery, which typically resolve diabetes before significant weight loss, and also how duodenal bypass exclusively has been reported to cure diabetes in atleast 1 person. Also I remember from this paper the author suggesting that a diabetic signal originating from the gut, caused fasting hyperinsulinemia. If excessive transport of glucose in the duodenum "causes" diabetes/hyperinsulinemia, then it would make sense that completely bypassing the duodenum with surgery would fix it.

It should also become apparent now one of the reasons Low-Carb is so effective is because it side-steps excessive glucose absorption in the duodenum, simply because there is no glucose to absorb. It also makes me wonder if the cause of "permanent" glucose intolerance people seems to inherit from diabesity is largely due to increased glucose transporters in the duodenum. Infact I would say that if you have increased glucose transporters in your duodenum, you have no CHOICE but to go low-carb. ( or surgically re-arrange your insides, up to you )

Theres still many "if's", and we must be careful with direction of causality.

I mean, it could be the high levels of fat and calorie intake and insulin resistance that spontaneously appears that makes these morphological changes happen................  who knows??

To me, it seems that *somehow* a carb heavy processed diet simultaneously changes the duodenum to facilitate increased glucose transport, aswell as morphological changes to the pancreas which make it hyperplasia/hypertrophy and secrete huge amounts of insulin, which makes you fat. With genetics helping to explain precise individual responses.

I really dont want to be against AS's, I have an incredible diet soda addiction, ( ive been known to drink 3 liters of diet soda at work in a single 12 hour shift ) However there is some evidence that AS's may facilitate diabetes, but also that they may promote increased glucose transporters in the duodenum by means of the sweet taste receptors they bind to.

In 2010 one team found piglets with AS's added to their diet unregulated SGLT1 and glucose transport in the intestine.