Some months back I went to a private clinic to seek help for my growing sleep apnea and snoring issues. They wanted £250 JUST for consultation. Revolted, I left and decided to do what should always been done these days when you have a health problem - research it yourself on pubmed and get your own cure.

You see, doctors are not there too help you, they are there to make money. The only person who really wants to help you is YOU.

Anyway, a few searches later and it had become quite clear that sleep apnea was very strongly "associated" with metabolic syndrome. Which in turn is strongly associated with insulin resistance and carbohydrate consumption. During my snoring troubles I had been on and off high-carb, as I usually am, and was probably more on high-carb than I wanted to admit to myself.

So I went back to zero-carb, which I know I can always count on. I know zero-carb rapidly resolves insulin resistance and metabolic syndrome, which I had hoped would also resolve my snoring. It took only a few days, but zero-carb did a fantastic job of alleviating both my sleep apnea and snoring. Within as little as a week there were substantial improvements, And within 2 weeks almost complete remission. This was accompanied by only mild weight loss.

The moral of the story is that, I firmly believe that for whatever reason, sleep apnea and snoring is caused by insulin resistance.
Posted by Kindke at 13:42 9 comments:

Can omega6 PUFA be slimming?

I found these studies recently and it has caused me to possibly rethink my stance on how PUFA omega6 may be fattening. More than anything, its important to always remain open minded.

This study was set out to simply help resolve the conflicting information coming from various studies about whether omega6 are pro-adipogenic or not.  Linoleic acid is a precursor of arachidonic acid, and it is arachidonic acid that is more the focus of this study.

To cut a long story short, the researchers found that keeping carbohydrates low in the diet was able to turn omega6 from fattening into ( potentially ) slimming. Mice fed a higher protein lower carb diet,  high in PUFA remained quite slim, while the higher carb fed mice became obese.

Below is the important graph in the study imo.... 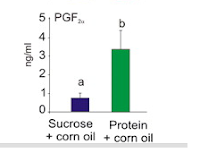 As you can see, prostaglandin F2α is significantly higher on the low carb,  higher protein diet.

The diets fed to the rodents are below... 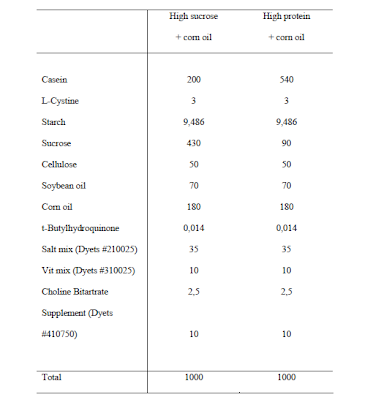 Anyway, some of you may notice that the change was in the sucrose, going from 9% sucrose to 43% sucrose may probably make you obese regardless of the other stuff in the diet......*shrug*

The feed efficiency was strikingly different between the mice, to quote..

In the high protein group, 467.8 kcal were needed to produce a weight gain of 1 g, whereas the high carbohydrate group only needed 67.8 kcal to produce the same weight gain, which almost exclusively represented an increase in adipose tissues.

In still yet another study, researchers were able to show that knockout of the enzyme Akr1b7 which produces prostaglandin F2α, automatically produces obesity ( they noted both hypertrophy and hyperplasia in this model ) . In particular they found increased expression of the lipogenic gene's,  fatty acid synthase and scd1 in the adipose tissue of the knockout group.

So in conclusion I think, the fattening potential of omega6 PUFA should be considered in context. Anecdotally I noticed especially good weight loss when I combined very low carb with large servings of peanuts, 150g+ per day.