I am strongly against calorie restriction. All the evidence I have seen indicates that, even if weight loss does occur, it changes your physiology and sets you up for future weight gain. Heres an introduction to "wet your appetite".

If an animal is in energy balance, its body mass and body composition generally remain stable. Although animals can adjust for subtle alterations in energy budget over the short term, prolonged imbalances can cause weight gain or loss. Dietary restriction has been advocated as a treatment for obesity for over 2500 years (Hippocrates, 5th century B.C.). Yet, despite the fact that caloric restriction is the oldest, most frequently prescribed and self-prescribed treatment for overweight and obesity, the strategy is seldom successful. Rates of weight loss under restriction are rarely sustained for any protracted period. Moreover, the lost weight is frequently regained when the period of restriction ends. ( link )


This paper does a good job of laying out what happens with calorie restriction, here are the best bits.....

A recent study has examined the neuroendocrine changes that occur with diet-induced weight loss. ( Lets put aside the well known affect of leptin insufficiency for the moment ). One of the things that occurs in diet-induced obesity is ghrelin resistance in the AgRP neurons. Normally, ghrelin serves to increase AgRP.

So anyway, this study starts off with making some rodents fat, ( high-fat diet again ) then, after obesity is established, they switch the diet of the rodents back to chow, or chow with 40% calorie restriction. Heres a graph of the final body weights... 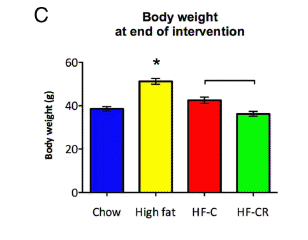 But look at HF-C, this is the group that lost weight eating Ad Libitum. They had the same level of AgRP as controls, indicating that their bodies did not perceive their new reduced weight as a state of starvation. This result suggests that weight loss without enforced calorie restriction does not increase AgRP, and so should hopefully make you less vulnerable to weight regain. Indeed, the authors make the point that it is the detection of negative energy balance that leads to increased AgRP following weight loss, and not the actual weight loss itself. If you can lose weight without your body detecting the negative energy balance, without stimulating an increase in AgRP, your probably more likely to maintain the weight loss.

Infact we saw this same thing back in the ketogenic diet unique state study.  Mice subjected to 35% calorie restriction had a nasty increase in AgRP despite similar bodyweight compared to ketogenic fed mice eating Ad Lib. Although these mice did not start off from an obese state.

This increase in AgRP in response to calorie restriction is very prominent in the literature, and make no mistake, AgRP WILL make you gain weight.

Lets re-iterate how potent AgRP is, courtesy of this paper.


"Starvation mode" is a mythical bro-science term that would commonly be stated to be a mode that you get into if you chronically restrict food intake. Well to me, it looks like "starvation mode" is actually a very real phenomenon and is mediated by AgRP.