Thanks to Bill for sending me this paper....

Since individual cells from freshly isolated white adipose tissue (WAT) exhibit variable levels of fat accumulation, we attempted to determine which factor(s) cause this variation.


If you look at those micro-scope pictures of adipocytes from adipose tissue, youll notice that they are not all exactly the same size.  ( see here for ex ). Below is a distribution count of rodent adipocytes isolated and exposed to growth  + adipogenic media.... 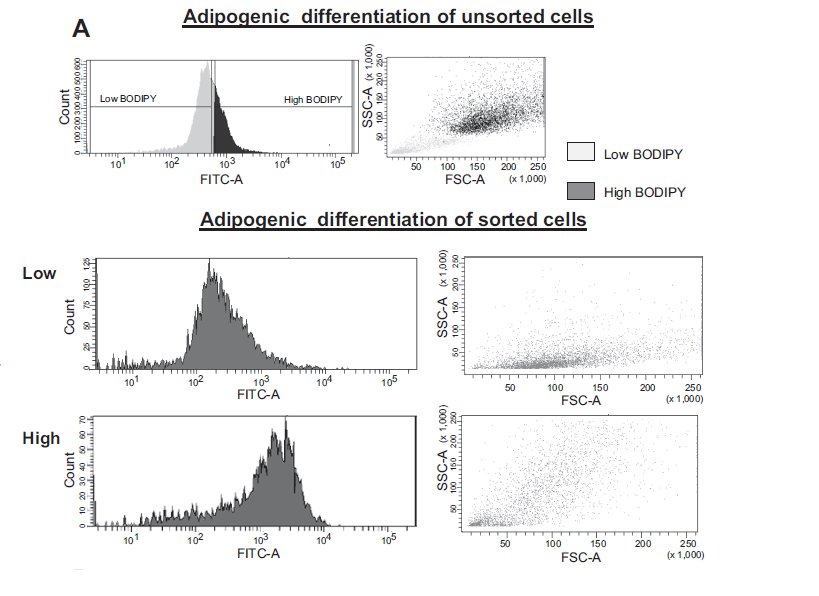 Cells were divided into a "high" and "low" category according to their BODIPY staining which was closely related to their size and therefore how much fat they stored.

As you can see from the top graph, you get an approximate normal distribution. But the question is why? Why arent adipocytes all the same size?

In general adipocytes from the same localized region of the body are exposed to the same concentrations of nutrients in the blood ( or there abouts ) and therefore CICO should predict for them to be roughly the same size. But they arent.....   therefore this can only mean there is a property intrinsic to the adipocyte that determines its size......

The extent of fat accumulation is correlated with histone acetylation of the Ppar promoter that is heritable and maintained even in dedifferentiated adipocytes.


What this means in plain english is, that if you take a bunch of adipocytes and expose them to growth media and adipogenic media, leave them to incubate for a few weeks, then examine them under a microscope, they are NOT all exactly the same size, even though they were all exposed to the exact same conditions.

If you snoop around a bit more, youll find the thing that determines how "fat" an adipocyte gets is correlated with the histone acetylation of the PPAR-gamma gene. "histone acetylation" is how biology does gene regulation, I.E. how strongly a gene is expressed. As the paper says....


So a gene with a high histone acetylation will have a high transcriptional activity and be expressed strongly within the cell. Overall this is just a fancy way of saying, a fat cell has a "set point" for the amount of fat it will store that is dependent on the genetics of that cell.

To understand how I can make that statement, you need to go back all the way to this post...in which we learned that PPAR-gamma plays a huge role in determining how much fat you store.  Now we can understand a bit better why there is *some* truth to the idea of a fat/weight "set point", .

Each individual fat cell in your body has a fat/weight set point, that is determined by the histone acetylation of the PPAR-gamma gene. And your total body fat mass is just the sum of the fat mass of all your individual adipocytes...... therefore YOUR fat mass has a "set point".....unless you grow new adipocytes, in which case your fat mass "set point" goes up

This helps explain why people with more fat cells are generally fatter.

The following graphs show some of the characteristics of the fat cells before and after exposure to growth media....

Interestingly, the insulin receptor expression was not different between fat cells that ended up being small or large.....

This would suggest that it is post-receptor signalling that is involved in the "insulin sensitivity" of a fat cell.  Indeed you could say that large fat cells achieve their inflated sizes by having elevated expression levels of PPAR/GLUT4/SREBP1c.

I was especially interested in the GLUT4 graph, because I have seen previous evidence that GLUT4 is very anabolic for fat tissue. GLUT4 over-expression on adipocytes results in gross adipocyte hyperplasia, and that hyperinsulinemia selectively increases GLUT4 on adipocytes and reduces it on muscles.

Anyway, im not sure what controls GLUT4 gene transcription in adipocytes, I think PPAR-gamma is involved since Thiazolidinediones, which are PPAR-gamma agonists, increase GLUT4 on adipocytes.

This study demonstrates that subpopulations reside within WAT and 3T3-L1 cells that vary in their capability to accumulate fat and that these differences are heritable. We have shown that the extent of the cell’s ability to accumulate fat correlated positively with expression levels of Ppar , a master regulator of adipogenesis, and with other markers of differentiated adipocytes, including Lep, Tshr, InsR, Glut4, Fasn, Srebp1c, aP2, and Pref1; exogenous expression of Ppar in 3T3-L1 cells increased fat accumulation; and the levels of histone H3 acetylation of the Ppar promoter in preadipocytes was a predictor of the extent of fat accumulation upon induction of adipogenesis.

We thus suggest that epigenetic modification of the Ppar promoter is, in part, the mediator of the heritability of adipocyte differentiation.


With respect to the bolded sentence, "exogenous expression of Ppar in 3T3-L1 cells increased fat accumulation", do you remember how to increase Ppar in vivo?......... Insulin.

I do also wonder about the implications of the epigenetic modifcation of the histone acetylation of Ppar and the coincidence of fat mothers ( parents ) giving birth to fat babies.